Magna Carta: More Interesting As Idea than As Artifact 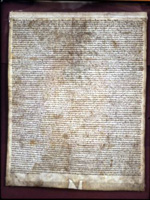 The Copy of the Magna Carta at Salisbury Cathdral
One of the original copies of the Magna Carta is kept in the Chapter House of Salisbury Cathedral in Salisbury, England. The parchment document is smaller than you might expect – it’s only about 12-inches wide by 18-inches long. The scribe who copied it had remarkably consistent penmanship, but the only people who can easily decipher it are Latin scholars who enjoy plowing through densely written, medieval text --  there are no paragraphs or indentations and none of the 63 clauses is numbered.
Salisbury’s copy of the Magna Carta is actually a copy of a copy of the document to which King John affixed his seal on June 15, 1215 at Runnymede. That agreement was formally recorded a month later on July 15, 1215. The recorded document itself was then copied and distributed. No one knows exactly how many copies were sent out, but the author of Wikipedia’s Magna Carta entry suggests there were more than 40. Of these, 4 survive (besides the one in Salisbury, two are held by the British Library in London and one is held by the Lincoln Cathedral).
As an idea, however, the Magna Carta definitely had legs. Though King John reneged and ended up in a war with the barons (wars between the feudal barons and the king were not uncommon in England at that time), the principles laid down in the Magna Carta did eventually became the cornerstones of British law and its parliamentary system of governing. For Americans, the most important of the Magna Carta’s  63 clauses  is the right to due process. 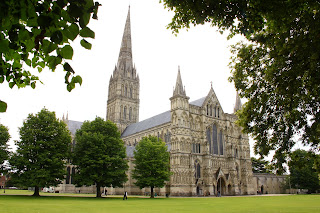 Salisbury Cathdral
Note: My observations were made during a trip to Great Britain, Italy and S. France in June and July, 2011. I am posting them after my return to the US.
Posted by Katherine Salant at 5:04 PM 1 comment: 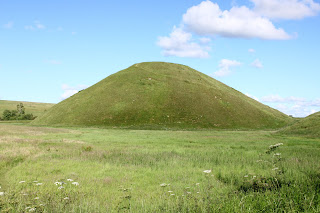 Silbury Hill
Silbury Hill is a man-made creation. Located in the flat-as-a-pancake English lowlands (at least that’s how most Midwesterners would characterize the Wiltshire landscape that surrounds it), Silbury Hill is the largest Neolithic mound in Europe, and one of the largest such “structures” in the world.
Even by modern standards, Silbury Hill is big. It stands about 130-feet high (about the height of a 13-story modern office building). In circumference it measures about three-tenths of a mile; in area about 5 acres.
More amazing to this observer is how it all began – with basket loads of gravel, some wooden stakes and stone boulders. To this, successive layers of chalk rubble (found in the adjacent countryside) and dirt were added over a period of about 250 to 400 years. The volume of the mound is estimated to about 324,000 cubic yards. Assuming that each basketful held about one cubic foot, this works out to be about 8.75 million basket loads. No wonder it took several hundred years to complete the project.
Why did they build it? Scholars have no idea. Smaller Neolithic mounds nearby were used as burial sites, but archeologists excavating at Silbury Hill have found nothing underneath all that dirt.

Posted by Katherine Salant at 4:33 PM No comments:

Neolithic Astronomy and Engineering: Humbling to a Modern Observer 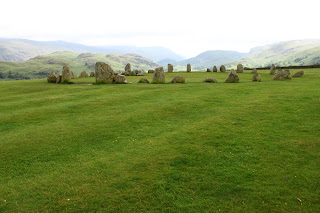 Castlerigg Stone Circle
To a modern observer, the engineering and astronomical feats of the Neolithic peoples who lived in the British Isles five thousand years ago are humbling. They had no system for writing or for complex mathematical notation; nonetheless, they were able to record their observations of the sun and the moon as they moved across the sky in the course of a year. The Neolithic people lacked the wheel, but they were able to move large and heavy stones long distances and then precisely position them in large circles to mark the sunrise and sunset for important dates in their calendar.
The enormity of these Neolithic accomplishments began to sink in after I visited the Castlerigg Stone Circle and started to wonder how these ancient peoples had built it, despite their daunting limitations.
Castlerigg Stone Circle, located in the Cumbrian region of England, was built about 5,000 to 5,200 hundred years ago. Today, 38 of the original stones still stand in a slightly flatted circle that is 107 feet in diameter. The stones, which stand 3 to 5 feet high, 'were not worked or shaped in any way. They mark the position of the summer and winter solstices, Candlemas (the festival that celebrated the time to begin spring planting), and the setting of the most southerly and most nothernly moons. 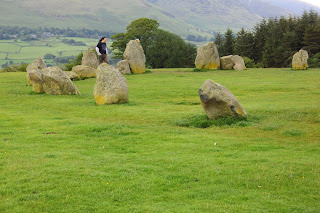 Most of the stones are 3 to 5 feet high
Castlerigg Stone Circle predates the stone circles of Stonehenge by about 800 to 1,000 years. It is thought by many to be the oldest such circle in England and perhaps in Europe.
The Castelrigg Stone Circle also includes a unique feature: 10 stones form a rectangle at one end. Its purpose is unknown, as is the purpose of the circle itself. Scholars speculate that the site, as well as other stone circles, was used for trading, religious observations, and tribal gatherings. 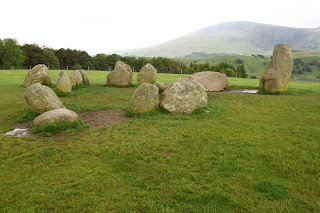 10 stones form a unique rectangle
Note: My observations were made during a trip to Great Britain, Italy and Southern France in June and July, 2011. I am posting them after my return to the U.S.
Posted by Katherine Salant at 8:18 PM No comments: